Link to original article on the BBC News website 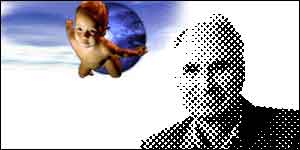 By BBC News Online internet reporter Mark Ward
Soon you could be downloading software, music and video clips from your newspaper.

Two US companies have found ways to turn bits and bytes into dots that can be printed on almost any quality of paper – even newsprint.

The system that defines the dot pattern ensures it will be read even if up to a quarter of the image is missing or smudged.

When the dots are read with an ordinary scanner they are converted back into their original form, be that a web address, video clip or program. Already newspapers in Japan and the US are trying out the technology.

Readers of the 17 May edition of the Daily Express got a chance to try out one of the technologies in an experiment conducted with the help of the BBC’s Tomorrow’s World TV science programme.

Printed on page 48 of that edition of the Express was a panel of dots that resembled a very smudged picture. The panel contained a video clip turned into dots using a system developed by Atlanta-based Intacta.

The Intacta system can fit up to 12,000 characters in a printed space as big as a credit card.

Using software supplied by Intacta and a handheld scanner set at a resolution of 300dpi or higher, anyone should have been able to convert the dots back into the video clip.

Instructions on how to convert the dots to video were given on Tomorrow’s World on 17 May and on the programme’s website.

The full clip was made available on the Tomorrow’s World website from 19:00 GMT on 17 May. 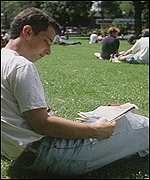 Is he reading or surfing?

In early May, the Charleston Post and Courier in South Carolina started trials of another technology which prints tiny barcodes alongside stories and adverts in the paper.

When the barcodes are scanned they take a user straight to a website. The newspaper is using the codes to direct people to more detailed versions of stories in the paper, to show people photographs of the goods being offered in classified adverts and to direct readers to websites carrying special offers.

So far only 100 of the Post and Courier’s 100,000 readers have the special scanners that can read the codes but another 2,900 are being recruited to the trial.

Charleston based-Gocode developed the system of turning website addresses into barcodes and this Autumn magazines such as GQ, Forbes and Wired are planning to run adverts featuring the tiny codes.

Gocode is now working on ways of making mobile phones and handheld computers read the codes.

The developments come as market analysts from the Forrester Research warns that newspapers in Europe are not doing enough to stem the flow of readers away from print to the internet. The Intacta and Gocode technologies might be a way for newspapers to start to embrace the web.